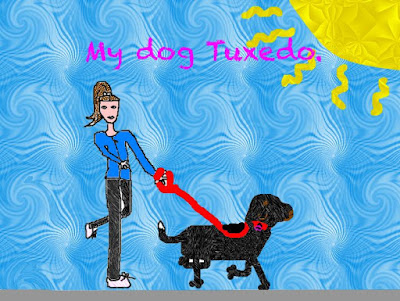 I have a dog called Tuxedo He is two years old but in dog years he's fourteen. Tuxedo is a spoodle. It's a type of dog crossed between a spaniel and a poodle . My family and I bought Tuxedo when he was twelve months old. Tuxedo was the only dog that we were allowed to take because the rest of the dog's were under age to take.Out of all the dog's Tuxes was the maturest dog because all he really did was walk around the little place and sit on my mum's lap. One of the thing's that he did to show off but instead of showing off he did this, Tuxedo thought that we would buy him if he could do a cool trick so he looked around Next he finds a bucket of water so he ran and jumped but he didn't jump far enough so SPLASH!!! - water went everywhere!. Tuxedo is the best pet for me and if you ever meet him you will know.